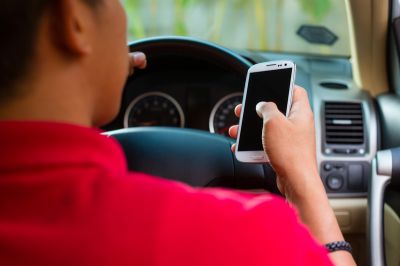 As the 12th largest economy in the world, California has long influenced automotive policy in the U.S. and globally, particularly around emissions standards.

According to Wikipedia, “California’s emissions standards are set by the California Air Resources Board, known locally by its acronym CARB. CARB wields enormous influence over the emissions requirements that major automakers must meet if they wish to sell into that market. In addition, (16) U.S. states also choose to follow the CARB standards, so CARB’s rulemaking has broader implications within the U.S. … and CARB's policies have also influenced EU emissions standards.”

Given the size and influence of California’s automotive market, the time may have arrived for California to begin shaping in-car smartphone use policies as well.

On March 21, 2013, the Superior Court of Fresno County, California, reached the following conclusion and verdict:

“(The) statute, however, is specifically designed to prevent a driver from using a wirelesstelephone while driving unless the device is being used in a hands-free manner. The plain language of the statute and its legislative history support that conclusion. Because it is undisputed that appellant used his wireless telephone while holding it in his hand as he drove his vehicle, his conduct violated Vehicle Code section 23123, subdivision (a). Accordingly, the judgment of conviction is affirmed.”

California interpreted the state’s existing anti-texting and hands-free phone use laws – and their legislative history and intent – as applying to all forms of phone touching while driving. It is a conclusion strikingly obvious in retrospect, yet its implications have yet to be grasped.More than 10 years after the arrival of the first smartphone, it took a California court ruling on appeal to determine that touching a phone – not just the specific task of texting or dialing, but touching – was sufficiently distracting to already be explicitly sanctioned by existing law. The ruling received widespread attention, but it remains unclear whether the other 49 states or even the federal government got the message.

Smartphones represent a valuable tool for communications, entertainment and even safety applications, but only when properly connected to the car. Using wired and wireless connections, companies like Airbiquity are increasingly enabling connectivity of the phone in a manner that prevents direct manual use of the handset.

California has caught on to what many European countries learned a long time ago. It is best and simplest to make touching a phone while driving illegal. As noted by the judge in the Fresno appeal, it is almost impossible and certainly pointless for law enforcement officers to be asked to discern the difference between a driver looking at a navigation map while holding a phone (as in the case in question) and dialing a phone call or entering a destination. It is sufficiently distracting and dangerous for a driver to be looking at the phone as he or she is driving.

Connectivity solutions from Airbiquity and others effectively lock out the smartphone screen eliminating any direct use of the phone. With a little luck and perseverance maybe the federal government or at least the National Highway Traffic Safety Administration will finally recognize that the simplest and most sensible solution is a national ban on touching phones while driving. The message from California is loud and clear: Don’t touch your phone when driving.